Home  |  blog  |  6 Reasons Tilapia Farming is Dangerous to Your Health 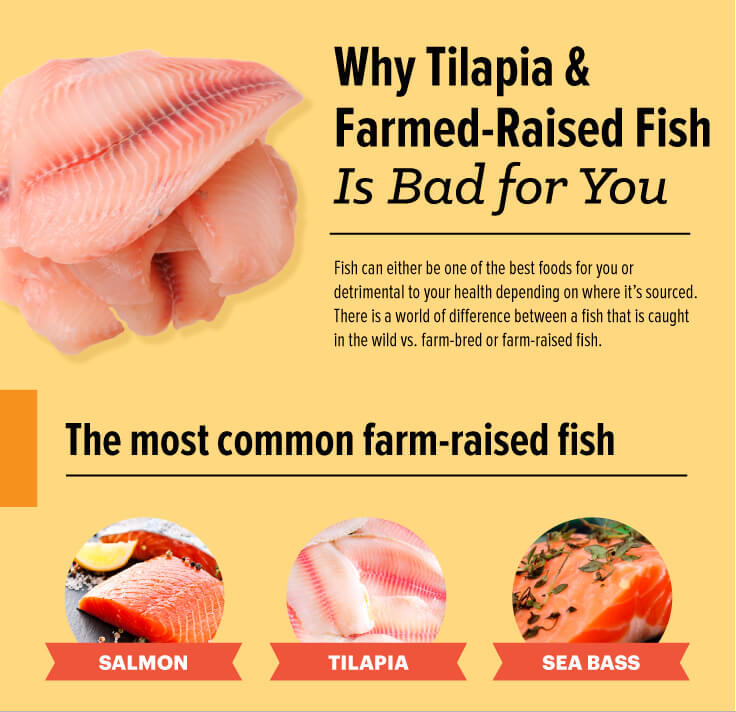 Farm-raised tilapia has always been a popular source for fish, not only because it’s widely available in the U.S., but it’s also very inexpensive. However, before you stock up on tilapia, you may want to know about its correlation to inflammation. Recent studies have concluded that eating tilapia may worsen inflammation that can lead to heart disease, arthritis, asthma and a world of other serious health problems.

People who resort to eating more fish as a way to get their dose of omega-3 fatty acids and lessen their risk of heart attacks may want to hold off on the tilapia. In fact, a scientist from Wake Forest University has found that the inflammatory potential of tilapia is far greater than that of a hamburger or pork bacon!

2. Farmed salmon may have at least 10 times the amount of cancer-causing organic pollutants compared to the wild variety

This can most likely be attributed to the feeds that are used on farm-raised fish. If you knew what went into the feeds of farm-raised fish, you would be horrified. Apparently, chicken feces is one of the main ingredients that go into farm fish feed. Not only that, the transfer of pig and duck waste to fish farms is also a very common practice.

3. Farm-bred fish have been found to have high concentrations of antibiotics and pesticides

Where do farm-bred fish get their antibiotics? The crowded conditions of fish farms cause the fish to be more susceptible to disease. To keep them alive, farm owners give antibiotics to the fish to stave off disease — similar to what occurs in confined feedlot operations for cattle.

Farm-bred fish are also treated with pesticides to combat sea lice. The pesticides used to treat these fish are so deadly that they will kill wild salmon that are accidentally exposed to them. These pesticides are also eventually released in the ocean, where they get into the bodies and systems of other marine life.

Many of us consume fish, hoping to reap the omega-3 fatty acid benefits that come with it. However, did you know that the omega-3-acids that are found in farm-raised fish are less usable in our bodies compared to wild-bred fish? Farm-raised fish also has a lower protein content.

Not only that, because farm-raised fish are kept in cages, they have the tendency to be fattier and can have a higher concentration of omega-6 acids. The problem with getting too many omega-3 and omega-6 acids is that they, again, may cause inflammation to the body.

5. Dibutylin levels, a chemical used in PVC plastics, is said to be six times higher in farm-raised mussels compared to wild ones

Dibutylin is toxic and can impair immune system function while also contributing to inflammation. Dibutylin may be the reason as to why there is a rise in asthma, obesity, allergies and other metabolic disorders in recent years.

According to the Environmental Working Group, the “first-ever tests of farmed salmon from U.S. grocery stores show that farmed salmon are likely the most [dioxin-like] PCB-contaminated protein source in the U.S. food supply.” Dioxin is actually a very toxic chemical that can contribute to cancer and other complications. The problem with dioxin is that once it enters our system, it can take a very long time until it leaves. Grimly, the half-life of dioxin is about 7 to 11 years!

These are only some of the dangers that have been linked back to eating farm-raised fish. What does this tell us? No. 1, we need to find out where our fish is coming from. Not all fish are created equal, and sad to say, farm-raised fish, instead of helping us, may even harm us.

In addition to farm-raised fish being bad for you, there is actually one other creature of the sea that is even more toxic. That creature is shrimp.